At the Archbishop Stepinac High School in White Plains, NY, print textbooks are a thing of the past. For the 2013-2014, school year, the school has converted its curriculum to digital textbooks stored on an Internet cloud. So far, according to Lisa Alfasi of Pearson Education, Stepinac is the only high school in the country to abandon print textbooks entirely.
Digital textbooks are certainly a growing trend in the education sector, and not just in private educational institutions. By 2017, all North Carolina public schools will receive funding for exclusively digital textbooks. While moving to a digital library has its perks, the question remains how every single student will gain access to a computer, either provided by the school or a “bring-your-own” policy.
But after high school, according to the 2013 College Board Trends in College Pricing Report, students budgeted approximately $1,200 for textbooks and supplies for the 2013-2014 academic year. Student debt is an enormous obstacle for many recent graduates (read this excellent NY Times feature for an in-depth look at this issue), and the cost of textbooks often is not even included in tuition and fees that can near $60,000 per year for private universities alone.
In college, due to rising prices of hard-copy college textbooks, both online resources and textbook rentals are increasing in popularity. According to this USA Today article, some students avoid purchasing textbooks altogether in an effort to defray already astronomical education costs and student loans. In the future, it seems that textbook companies will have to develop cost-effective interactive and online versions of their books.

From this report, we can see that in the US, printed college textbook prices have risen at a rate of 82% from 2002-2012, and the Consumer Price Index (CPI) — which measures change over time in prices for bundles of consumer goods — has risen at a comparably much slower rate, 28%.
What does this mean? The cost of print textbooks is rising at a significantly faster rate than consumer goods at large. Therefore, proportionally, textbooks are becoming more expensive more quickly when compared to other goods considered in the CPI, which include eight major groups: food and beverages, housing, apparel, transportation, medical care, education and communication, and other goods and services. At the start of the 2013-2014 academic year, Bloomberg news addressed this textbook inflation as an “untenable trajectory,” according to Watson Scott Swail, president and CEO of the Educational Policy Institute.
To improve learning experiences, like at Stepinac High School, and offer a lower-cost alternative to print, publishing companies like Pearson Education are exploring options to capitalize on 3D digital technology for interactive textbooks. For example, Pearson’s Prentice Hall “United States History” digital text for iPad costs just $14.99 on Apple iBooks…
https://www.youtube.com/watch?v=VHNk0L2agY4
…But some would say that digital textbooks cannot replace the attractiveness of a hard copy textbook, at least in early childhood education.
https://www.youtube.com/watch?v=CBksLwCKLvk
Let’s return to the Stepinac model for a moment. With technology on the rise in classrooms, students unarguably have greater access to educational materials and resources. But what’s the solution for K-12 public schools, where funding usually does not cover procurement of technology for individual students (a problem case in point for the North Carolina plan to “go digital” by 2017)? And what about private and public universities, which generally provide neither print/digital textbooks nor computers for their students? The cost of learning remains a challenge, despite the benefits of a growing trend in digital textbooks in K-12 and university learning environments.
On a lighter note, thanks to Cagle Cartoons for this one. 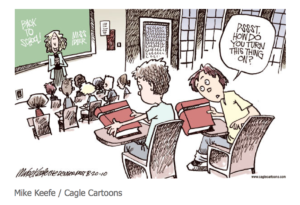 In your opinion…
Do you think digital textbooks should replace all, some, or no print media in K-12 and higher education classrooms?

Check back tomorrow for how SMARTdesks suggests “going digital” in the classroom!